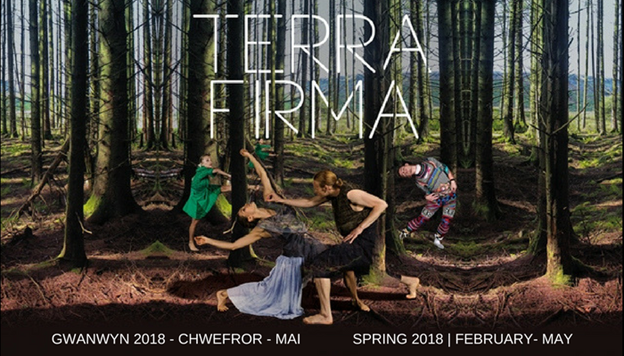 ·UK tour visits 16 towns and cities across England and Wales

·Production images and trailer can be downloaded here: Terra Firma

Following its ambitious and successful staging of P.A.R.A.D.E. National Dance Company Wales (NDCWales) prepares for its new Spring programme,Terra Firma, and announces 16 dates touring to towns and cities across the UK, starting its journey in the Welsh capital on 8 February 2018.

The three choreographers behind each dance piece of the Terra Firma tour are all reciptients of the Copenhegan International Choreography award over various year.

For NDCWales; contemporary dance is a way to tell old stories in new ways. Pulling together vibrant physicality with memorable music and beautiful scenery. The tour sets out to follow NDCWales’ ambition to tour nationally and internationally and present work by the best international choreographers. The company continues to diversify by bringing a fresh and dynamic programme to reach new audiences.

Terra Firma will be touring four pieces in total, with each venue staging three of the four pieces. Terra Firmatells stories drawn from the very ground on which we build our communities.

Folk is a twisted vintage fairy-tale under the boughs of an upside-down tree. They say ‘there’s nowt so queer as folk’ and in this quirky and surreal portrait of community life, Caroline’s grim characters paint a fantastical picture. The theatrical choreography, and dark humour are accompanied by a captivating soundtrack and rich, haunting designs. Folk was the first piece created by Finn for NDCWales which was a hugely successful showcase for the British Council at the 2017 Edinburgh Festival.

The Green House by Caroline Finn

The Green House brings the outside in; on a verdant Wes-Anderson style TV set, the ‘stars’ are stuck in a never-ending loop. Beautifully unsettling and full of character. Caroline's trademark darkly comic and quirky choreography asks the question: “if we do the same things over and over, how can we expect different results?”

Tundra is a barren landscape where ultra-modern creativity blinks into life and tears pages from history books about Russian folk dance, the USSR and revolution. Marcos Morau’s bold style draws inspiration from art and cinema. Tundra takes old ideas and uses contemporary dance to give them renewed meaning. Tundra was first performed as part of NDCWales 2017 production - P.A.R.A.D.E., one of the flagship events in the Wales’ Russia ’17 programme which was staged in both Cardiff and Bangor.  Tundra was recently named as the Best Dance Event of 2017 by Wales Arts Review.  It now returns to the stage as part of the Terra Firma tour where audiences eagerly await this extraordinary dance piece created by Marco Morau which includes his unique, visually pleasing style of choreography and performed by world class dancers.

Atalaÿ is a watch tower from which far off lands can be seen from four points; a contagious dance influenced by the warmth of the Mediterranean. Mario Bermudez Gil draws on his Spanish roots and Israeli training and blends them with NDCWales’ quirky theatricality to make a piece full of character and incredible skill.

In April, the company will also perform Terra Firm in Austria and Germany.

Paul Kaynes, National Dance Company Wales Chief Executive said, “This is a very extensive tour for us – 19 venues in all. It’s a wonderful opportunity for us to show just how vibrant the Welsh dance scene is, across the UK and in Germany and Austria as well. These 3 choreographers – all winners of the Copenhagen Choreographic Competition – represent the cream of the crop of European dance artists. They create dance which is resonant, mysterious and captivating. We’re excited to get on the road and share the work with our audiences this Spring.”

Caroline Finn, National Dance Company Wales’ Resident Choreographer added “I first met Marcos Morau in 2011 at the Copenhagen International Choreography Competition where we were both prize-winners. Since then, our paths crossed more than once as we went on to create pieces in Copenhagen and in August 2016 we both found ourselves on the Jury of the very same competition. I was thrilled to have the honour of awarding the Production Prize that year and I did so- without hesitation- to Mario Bermudez Gil, inviting him to come and create a work for NDCWales.”

She added “Each piece of work included in the tour will hopefully immerse the audience in such an inviting and unique universe- physically, visually and emotionally. They have all been inspired by landscapes and communities from around the world.”

Caroline has recently been appointed as the company’s Resident Choreographer following her two-year stint with the company as Artistic Director.

Audiences will also have the chance to access National Dance Company Wales’ participation opportunities as part of the tour. These include:

Discover Dance - An ideal introduction to dance for young people and adults.  This is ideal for young people (aged 7 and over) and is a joyous, fun experience of joining in and watching a dance piece whilst learning what it’s like to be a dancer.

Watch Dance Class – An opportunity to sketch, photograph and learn more about the backstage secrets and watch the dancers up close as they prepare on show day.

Post Show Talk – A chance to ask Rehearsal Director Lee Johnston and NDCWales dancers about their work and what it takes to become a dancer in a leading UK dance company.