Lunatic is an energetic riot. It is fun, relevant and fired up. It smashes together 30’s music and style with 90’s pop-culture. First shown over 10 years ago it is fuelled by questions surrounding nationality, gender and class.

Music: Moonlight Serenade, When Johnny Comes, Marching Home, Under A Blanket, American Patrol by Glenn Miller, Confusion The Waitress by Underworld, Little Things Mean Alot by Kitty Kallen, 6 Suites for Cello, Suite No. 1 in G Major by JS Bach, The End Of A Love Affair by Billie Holiday, Such A Night by Jonnie Ray, Symphony No.2 in C Minor - Resurrection’ by Mahler 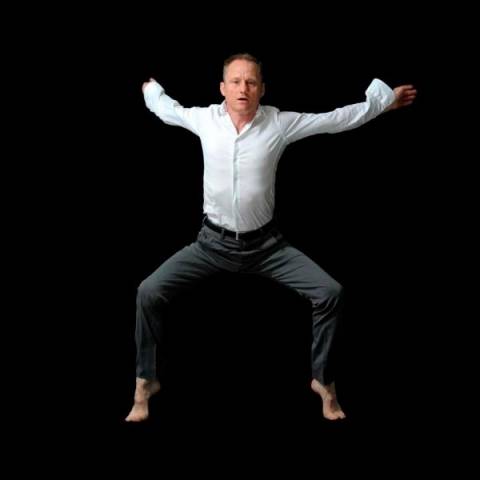 When Nigel created Lunatic in 2009, he explained that the title was inspired by dreams, nightmares and the moon.
Noting that “When people look at the word Lunatic they think of madness, so they are prepared for anything that can happen on stage, it is not predictable.” He recalled that whilst on a trip to Prague, he found it hard to sleep and spent a lot of time awake whilst others slept under the moon. ‘Moon, Luna, Lunatic’.

Following this, he watched a documentary about insomnia, sleep walking and the things people do whilst asleep. He asked whose decision it is was who was labelled as ‘mad’.

Nigel was also fascinated by the 1950’s. There was a period after the war when people expected things to be better, but were disappointed; something as relevant in 2020 as it was in 2010 and indeed 1950.  The music, style and design of the 1950s provide the setting for Lunatic including, of course, Glenn Miller’s Moonlight Serenade.

Raised in North Wales, Nigel studied at Royal Welsh College of Music and Drama, co-founding the ground-breaking DV8 he went onto tour internationally a unique series of solo performances and company works.

Nigel made dance that connected audiences. He created dance that anyone could understand and relate to; and that’s as true today as it ever was.

“The work is flavoured by earlier times but crafted with the immediate engagement desired by the ‘You Tube Generation’, quite short scenes that quickly flow and develop, dance that immediately communicates and connects.”

The Nigel Charnock Archive premiere a documentary about the restaging of ‘Lunatic’ which was part of our cancelled KIN tour, and we will tour again in 2021.

It's a 30 minute look into the incredible mind of Nigel and the complexity and emotion of the first restaging of a full piece since his death.